John H. House, 54 years old, and other officers were sent to the home of J.F. Stever, 2502 S 4th on the evening of July 27, 1922 on a report that Stever and his wife had been fighting. At about 9:20 p.m. the officers were sent back to the Stever residence on a report that Stever was in his front yard trying to kill his baby. When patrolmen House and Stumpf arrived, they were told that Stever had threatened to drown the child. Officer House advised Stever that he would have to go to the station, and Stever carried the child back into the house and laid the baby on a bed.

As the patrolmen went to arrest Stever, a fight started and Stever hit both officers with a chair. Officer House fired a warning shot and told Stever to put the chair down. Officer House told officer Stumpf to "shoot him" and Officer Stumpf fired his own gun toward the floor just as Officer House stepped forward to grab Stever.

The bullet struck Officer House in the left leg. Stever ran to the back of the house. A riot call was turned in by officer Stumpf. Upon the arrival of more officers, Stever was arrested and charged with two counts of assault to kill. A private car drove Officer House to the Central Police Station because all the police vehicles were out on "whiskey raids." It was some time before the decision to take Officer House to the hospital in a private car was made. The coroner reported that the wound should not have been fatal and Officer House died because he had not received proper medical attention after the shooting. Officer House was survived by a wife and five children. 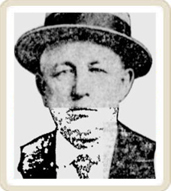