The St. Joseph Fire Department was established in 1865 when the community passed a bond to purchase the city's first steam powered fire pump. The pump was named the "Blacksnake." Most fire equipment was given personalized names in this time period. The "Blacksnake Company" was staffed by former members of the Union Army and a team of horses pulled it.

In the 1800s, rival fire companies would sometimes fight each other at a fire scene. The company that was responsible for extinguishing the fire would be awarded a broom to place on their equipment. To have the broom displayed on your fire unit was an honor and resulted in fights between rival fire units.

On the displayed photographs there is a broom at the front of the "Waterwitch."

In 1870, the "Waterwitch" company was disbanded by the City Council and the City of St. Joseph established its paid fire department utilizing the steam pump "Blacksnake." 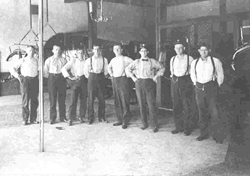 The St. Joseph Fire Department is one of the oldest fire departments west of the Mississippi River. Throughout its history, it has been innovative and progressive in its service to the community. The fire department of the 1800s was used as a model for smaller departments throughout the western United States. The brass fire pole was reported to be developed here, as was the quick release harness for horse teams.

The quick harness was used for rapid exit from the firehouse. The harness fell onto the horses and was clipped by a single quick clamp.

Horses were an integral part of the early fire department in St. Joseph. The horses were highly trained. They could smell fire and would run to large blazes without supervision. The horses were respected and treated well. Some were even given retirement ceremonies by their fire crews.

In 1918, St. Joseph started replacing the horses with mechanized trucks. The replacement of the horses occurred in a ten-year period with the final horse team retired in 1928 at Station number 8.

Throughout our history, the St. Joseph Fire Department has been on the job 24 hours a day. Fire department members were on duty when Presidents Lincoln, Garfield, Kennedy, and Reagan were shot, and at the time General George Custer fought his final battle at Little Big Horn.

Fire department members served our community through the reconstruction of the south after the Civil War and when the United States purchased the Alaskan Territories from the Czar of Russia. St. Joseph firefighters were on duty the day a rail line was completed that connects the western United States to the eastern United States and when women obtained the right to vote. The day Wyatt Earp had a shootout with the Clayton family at the OK Corral and the day the lifeless body of Jesse James was viewed by St. Joseph firefighters.

They were manning the stations when the first motor cars were introduced to the public in the early 1900s and when the Wright brothers flew the first airplane. St. Joseph firefighters were on duty through the invention and adoption of the telephone, radio, television, computers, and the internet.

The fire department has had members who fought in the Civil War, Spanish American War, WWI, WWII, Korea, Vietnam, and both Gulf wars.

They were on duty through the impeachment of two presidents, the great depression, the invention of nuclear weapons and the rise and fall of the Soviet Union Empire. They watched in their fire stations as men beamed back pictures from the moon.

Twice St. Joseph's firefighters have watched the clock turn to a new century and the St. Joseph Fire Department will be serving tomorrow, protecting our community 24 hours a day.